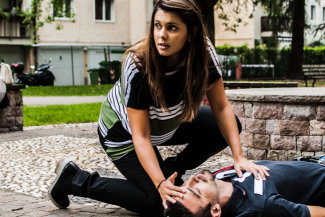 eveloped by AEDMAP has been deployed in France since 2016. The service confirms its success with 65 States deployed, 170,000 volunteers enrolled and more than 15,000 alerts. The survival rate has been doubled in the Paris region thanks to the intervention of the Citizen Responders.

The Citizen Responders has received the official support from the French Civile Defence.